The 'Connected' exhibition concept is something that has grown and evolved over the years, starting out it's embryonic life as the Nottingham Flickr Groups desire to bring the work of it's members to the physical world of print rather than just inhabiting the on line cyberspace image sharing sites such as Flickr and 500px afford us. Yes the digital world enhances our reach as photographers and brings people together, but the essence of photography and / or the photograph is the journey from image creation to skillfully bringing it to life as a physical print whether that be for our own personal presentation, a client or to exhibit and share.

Back in 2008 when the group held it's first exhibition, as is often the case, they exhibited at the Nottingham Central Library as it provided a good central location with a number of 'community' spaces which the group were able to use. It's fair to say that the library location suited the nature of the group and exhibition very well and provided a great springboard to the evolution the annual exhibition has gone through. Back in 2008 the number of exhibiting photographers was reasonably small and all were from Nottingham or the surrounding area although over the next two years the numbers increased immeasurably and it soon became clear the exhibition and group were quickly outgrowing it's early home. It was also worthy of note that around the same time the passing custom through the library seemed to be declining most probably as a consequence of the growing digital ways in which people consume books, music and film all of which were a massive part of the libraries offering aside from it's specialist books and collections.

In 2010 the group set out to look for a venue that had more of an 'arts' feel to it as an exhibition space, somewhere which presented a dedicated space for the work and which would support the growth and expansion of the group. Hopkinsons Gallery, also in central Nottingham, was negotiated and would be the venue for the groups 2010 'Perspectives' show which also featured the live music of Muha at the opening event. 2010 was a momentous year in many ways for the annual exhibition in that it was the first in a dedicated arts venue as well as being the first time where other forms of media had been presented along side the photography........... the final thing to make 2010 a stand out exhibition in the evolution of the group was the damn right awful weather (you must remember the 10"-12" of snow that winter?) which the visitors braved to see the groups work......... and they did in their numbers too!

The following year saw us take the exhibition on tour as part of the 'Limestone Journeys' series of events in conjunction with Creswell Crags  which was another great experience for all the photographers involved and bought their work and medium of photography to a wider audience once again.

Later that year the exhibition also went back to the central library in Nottingham for a final time after the library had been re-fitted and through a peculiar quirk of fate this was to prove to be a a defining moment in the exhibitions history. Whilst the space we had was stunning and presented very well indeed, footfall was still not as we would of liked for a city centre venue but more worryingly at various points we had to head in to re-hang the mounted prints as the old building, although re-fitted on the inside, had some major issues with damp on external walls of which our exhibition space had three of! After much soul searching and discussion between the organising committee we made the hard decision to end the exhibition a week early that year.

As I mentioned the events of 2011 proved to be a watershed in the whole exhibitions life, we had been thinking about ways to take the exhibition to the next level for a while and the time seemed appropriate to assess where we were and where we wanted to go. It gave us the opportunity to reflect on and understand the whole ethos of the exhibition and really take stock about how we organise the exhibition and integrate social media as a means to bring together photographers of all abilities from wider than just our immediate area. The exhibition had evolved and grown to be much larger than just the Nottingham Group, very apt in a world connected by social media and the internet that through the adversity of venue issues in 2011 the future of the exhibition for the coming years should be born.

In re-framing our whole ethos and aligning it with the driving passions of the ever growing group we were able to affirm what the exhibition stands for and our aims:

Thus 'Connected' was born out of these guiding principles, all we needed now was a venue to partner with whose ethos matched ours and with in the spirit of aiming high I organised a meeting with Chas Wood the owner of Patchings Art Centre in Nottingham. I'd been aware of the arts centre for some years and the fantastic work they do in promoting the enjoyment of art not to mention some of the fantastic names in the arts world who've exhibited there. There ethos seemed to align perfectly with ours so all that was left was to sell them our vision for 'Connected'. 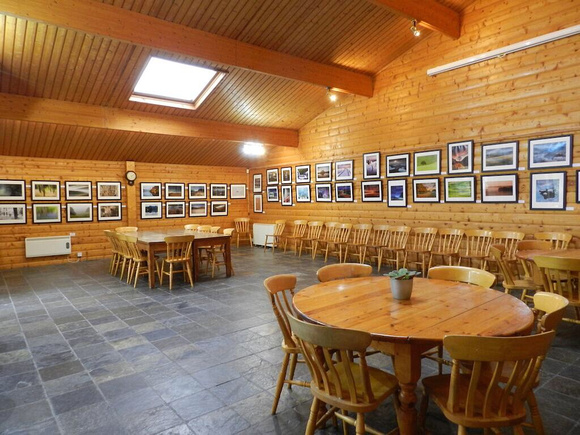 The 'Connected' exhibition series is something we are really passionate about delivering and improving year on year, we aim to incorporate and utilise mixed and multi media alongside the printed photography to give the audience an engaging and inspiring experience as they engage with and enjoy the inspiring work of all the photographers involved. 'Connected' still remains very much in touch with it's guiding principles and roots featuring and being hosted by the Nottingham Flickr Group but reaching out much wider and embracing it's connections across social media to bring to the Midlands an inspiring exhibition each spring. The opening event has been highlighted as the photography event of the spring bringing together many fantastic and passionate photographers and providing a fantastic social gathering for all the 'connected' togs across the realms of social media.

The planning for the 2015 exhibition is well under way with 'Connected' having it's on web site launch very soon to help promote the exhibition and the work of all the contributing photographers. We'll continue to engage with photographers across the UK & world building on the excellent community engaging across the Twittersphere. We have confirmed the two fantastic guest speakers for the 2015 opening event on Saturday 27th April as 'Take A View' Landscape Photographer of the Year 2014 Mark Littlejohn and the supremely talented Lizzie Shepherd so as you can imagine we are very excited!

For further details about getting involved in the 2015 exhibition which will also feature some inspired work produced by a local school entitled 'My City, My Home' have a look at the pdf document here.

Looking slightly further ahead we are already making plans for the 2017 event which will be exhibitions 10th anniversary which will see us take over much of the exhibition space across the Patchings complex to help us stage some fantastic celebratory events to mark this massive milestone!

Suffice to say we are really excited about 'Connected' and where it is going over the coming years and look forward to working with lots of fantastic photographers along the way.